EAST has published its 200th Fraud Alert.  These Alerts are issued by EAST National Members, often with the support of Law Enforcement and other EAST Associate Members.  To date 28 countries have issued Fraud Alerts covering ATMs, Unattended Payment Terminals (UPTs) and Point of Sale (POS) Terminals.

EAST first started issuing Fraud Alerts in September 2013.  These Alerts provide valuable and timely intelligence to law enforcement agencies and the industry, allowing the spread of emerging threats and criminal methodologies to be tracked across the world.  While most of the Alerts have been issued by countries within the Single Euro Payments Area (SEPA), there have been some from Belarus, Mexico, Russia, Serbia, Turkey, Ukraine and the United States. 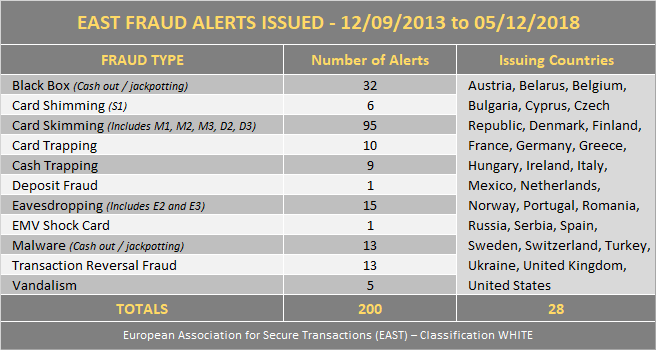 The EAST Expert Group on All Terminal Fraud (EGAF) initiated the Fraud Alerts and conducts in-depth analysis of some of the emerging threats and devices.  Each Alert covers: the type of fraud; the country where discovered; the terminal type(s) affected; an indication as to whether or not the fraud was successful; a description of the device and the criminal MO; indication as to the device location; information on PIN compromise (if card skimming or card trapping); and any available images.

EAST Alerts contain sensitive information and are restricted to EAST Members (National and Associate).  They are classified as AMBER using the variant of the Traffic Light Protocol (TLP) adopted by EAST.