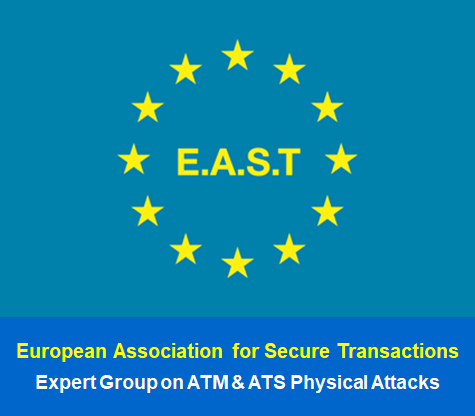 ATM Physical attacks remain a significant issue for ATM owners and other stakeholders (both public and private sector) in Europe and elsewhere, with explosive attacks (gas and solid explosive) of particular concern.  On 10th October 2018 the EAST Expert Group on ATM & ATS Physical Attacks (EAST EGAP) will hold an open Financial Crime & Security (FCS) Seminar in London to focus on the issue.  EAST EGAP is chaired by Graham Mott of the LINK Scheme.

EAST Executive Director Lachlan Gunn said ‘EAST EGAP was formed as a working group in 2014 and will hold its 10th Meeting on Tuesday 4th September 2018 in The Hague.  Attendance at EAST EGAP meetings is restricted in accordance with the group’s Terms of Reference, which makes the coming FCS Seminar in October a great opportunity for all those affected by, or concerned about, ATM physical attacks to engage with EAST’.

This interactive event follows the basic structure of EAST EGAP Member meetings.  An introduction to the Group will be followed by presentation of the latest EAST Physical Attack Statistics (H1 2018).  Then Gertjan Kaijen of Europol will give an update on the ATM physical attack situation in Europe, which will be followed by Law Enforcement updates from several of the key European markets.  After a networking break there will a session on the steps taken in Italy to counter ATM explosive attacks (gas and solid), and the event will conclude with a Q&A session on all attack types and counter-measures.  The event is co-located with RBR’s ATM & Cyber Security 2018 Conference.  See the full programme here.

Attendance at EAST EGAP meetings is limited, as it is a working group, and this EAST FCS Seminar enables wider participation and the opportunity for all attendees to engage with the Group and its organisers.

The Seminar is sponsored by: