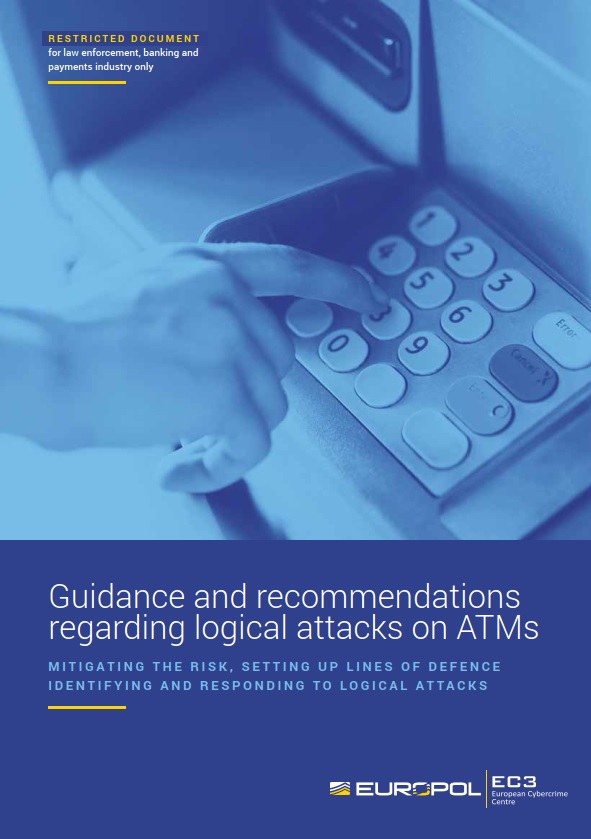 Europol has published new guidelines to help industry and law enforcement counter the ATM Logical Attack threat.  The document was officially launched at the 17th Meeting of the EAST Expert Group on All Terminal Fraud (EAST EGAF), which took place on Wednesday 16th January 2019 at ING Domestic Bank in Amsterdam.  Production of the document was coordinated by EAST EGAF.  It has three sections:

The original Guidelines were published in 2015 when law enforcement and the private sector came together to support the banking and payments industry. That report, the first of its kind, provided vendor-neutral guidance on countermeasures to such attacks, as well as a collection of indicators that could be used to detect when an incident may have occurred.  This new version provides clearer definitions and greater clarity of the criminal methods and techniques encountered in these attacks, and more detailed recommendations on how to mount a robust and effective response to them.

Steven Wilson, Head of Business at Europol’s European Cybercrime Centre (EC3), said “This updated and refocused edition of the report draws upon the expertise of an expanded panel of experts from both law enforcement and the private sector. In addition to the key role played by EAST, I would like to extend my thanks to Diebold Nixdorf, GMV, ING, INTERPOL, NCR, TMD Security and Trend Micro for their invaluable work and contributions, without which this report would not be possible.  I continue to look forward to Europol’s engagement and cooperation with all of our partners within private industry and law enforcement in such endeavours, and our continuing fight against threats affecting the payment industry.”

The 17th Meeting was chaired by Mr Otto de Jong and was attended by Europol and INTERPOL as well as by key representatives from Terminal Deployers, Terminal Vendors, Networks, Card Schemes, Security Equipment and Software Vendors and Forensic Analysts.

EAST EGAF is a regional expert group that focuses on regional and global payment terminal crime and fraud related issues, threats and counter-measures.  The Group, which meets three times a year in advance of each of the meetings of EAST National Members, enables in-depth and technical discussion to take place on Logical and Malware attacks, Card Skimming, Card Trapping, Cash Trapping and Transaction Reversal Fraud.

EAST EGAF meetings are restricted to working group members and, to provide a wider platform for sharing/discussion, the Group is holding a half-day open seminar in London on 9th October 2019.  Registration for this is now open and more information can be found on the EAST Events website.