During the final meeting for Project Sandpiper on 30th January 2014, it was stressed that a total of 52,812 compromised card numbers were recovered during the operations, with estimated savings to the banking industry of over GBP 23 million. The EU-based criminals were misusing financial credentials in mainly remote overseas destinations.

Head of the European Cybercrime Centre, Troels Oerting, said: “The criminal networks involved in this sophisticated electronic payment crime have been taken down as a result of many months of hard work by police officers and prosecutors in the European Union…… We continue our fight against this crime. The criminals continue to develop new methods for stealing our identities, money and ideas online, and we have to continue and further develop operations like Sandpiper and Skynet.”

The phenomenon of card-not-present (CNP) fraud is on the rise, accounting for 60% of all fraud losses on cards issued in the European Union, according to card fraud statistics published by the European Central Bank (ECB) in February 2014. A new EU-funded project, code-named Skynet, has been launched to focus on international cooperation to combat online CNP fraud. Six EU Member States are involved in the project.

EC3 at Europol provided analytical support and organised regular coordination meetings on the Sandpiper project at its headquarters. In addition, Europol’s information and analysis systems were used to exchange and cross-check the intelligence received from Member States. Operations and projects such as Sandpiper and Skynet demonstrate the crucial role of the exchange of information and intelligence through Europol’s channels and the importance of international coordination of such operations. 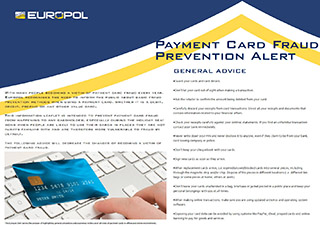 With many people becoming a victim of payment card fraud every year, Europol recognises the need to inform the public about basic fraud prevention methods when using a payment card, whether it is a debit, credit, prepaid or any other value card.  An information leaflet has been provided for cardholder use.