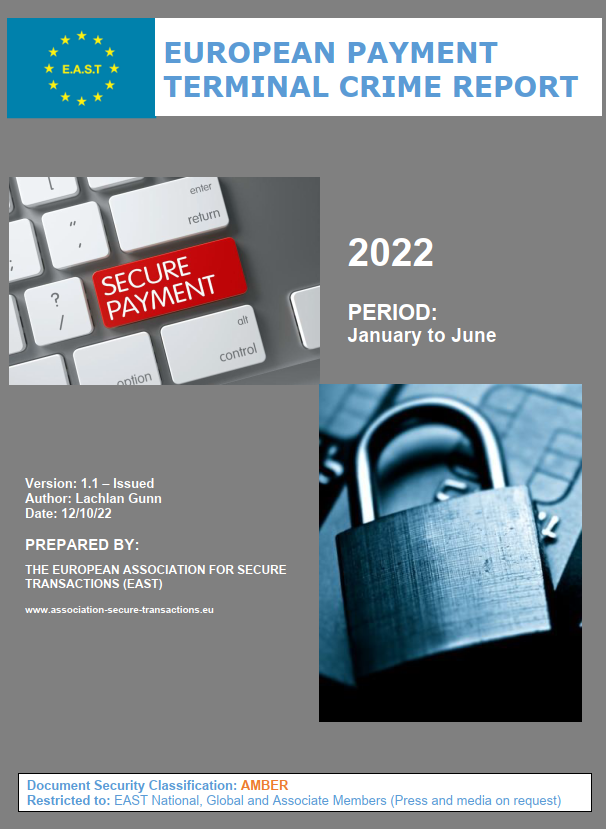 EAST has just published a European Payment Terminal Crime Report covering H1 2022 which highlights a new type of fraud along with a rise in terminal fraud attacks.

Terminal related fraud attacks were up 81% (from 2,775 to 5,022 incidents). This increase was primarily due to a rise in cash trapping at ATMs, which increased by 284% (from 819 to 2,984 incidents). A new type of man-in-the middle/relay attack was seen, with 501 cases reported. Total fraud losses of €97 million were reported, down 5% from the €102 million reported in H1 2021. Most losses remain international issuer losses due to card skimming, which were €80 million.

EAST Executive Director Lachlan Gunn said, “While an increase in cash trapping at ATMs has led the surge in terminal fraud, the new man-in-the-middle/relay attacks are much more complex and, if successful, can lead to cash out at ATMs.  Our Expert Group on All Terminal Fraud (EGAF) is monitoring and analysing these attacks, with close cooperation between industry partners and law enforcement in the affected countries.”

ATM malware and logical attacks were down 82% (from 33 to 6) and all but one of the reported attacks were black box attacks.  A black box attack is the connection of an unauthorised device which sends dispense commands directly to the ATM cash dispenser, to ‘cash-out’ or ‘jackpot’ the ATM.  Most such attacks remain unsuccessful, and no losses were reported during the period.  On 16 June 2022 Europol, supported by EAST, published updated guidelines to help industry and law enforcement counter the ATM Logical Attack threat.