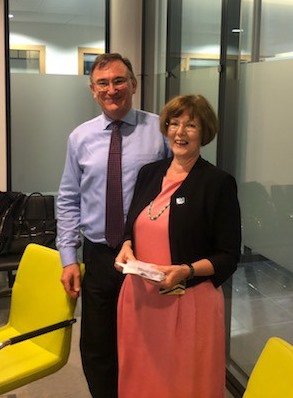 Susanne Kreuzer retired from EAST on 18th June 2019.  Susanne is one of the founder members of EAST and attended her first EAST meeting in 2004, representing Germany, a role she has held since.  When EAST created its own legal identity in 2007, Susanne joined the Board as a non-Executive Director.  She is also a founder member of the EAST Payments Task Force (EPTF), which was formally launched in 2016, and has been instrumental in helping to forge its direction and remit.

EAST Executive Director Lachlan Gunn said:  “When Susanne joined EAST in 2004 she came as a well-respected professional with a strong background in the prevention of financial crime.  Over the years she has done a fantastic job in gathering and collating information and data from the German market, that has been of great benefit to Law Enforcement and the industry.  She is one of a dwindling group of EAST founder members still active in the group, and without her energy, enthusiasm, commitment and support, EAST would not have grown to be what it is today.  On behalf on the EAST Executive Team, the EAST Board, and of all our members, I wish her a happy, fulfilling and well-earned retirement.”

Germany is represented at EAST by EURO Kartensysteme GmbH and Susanne’s role as EAST National Member representative will be taken over by Margit Schneider, who has also been connected with EAST for many years.

The 48th EAST Meeting was held at Europol in The Hague on 5th June 2019.  At this meeting Susanne Kreuzer was presented with a memento of EAST by Lachlan Gunn.  Otto de Jong, also a founder member of EAST and Chair of the EAST Expert on All Terminal Fraud (EGAF), then thanked her on behalf of all present, for her significant contribution to EAST, to law enforcement and to the industry, during a career in financial crime prevention that has spanned over 30 years.