Would you use a biometric solution to authorise an ATM transaction?  According to the latest EAST research poll the majority would now use such technology, but for many this would only be after a full explanation as to how their personal data would be controlled.

Biometric ATMs are well established in Japan, where tens of thousands are in operation, and their usage is spreading in other countries – banks in Hong Kong, Qatar, Poland, South Africa and Taiwan are also deploying the technology. A common system is ‘finger vein’ identification technology. The transaction is authorised by a finger scan, rather than by entering a PIN. The finger vein technology maps the internal vein system within a finger, and will only accept a living finger, meaning that authentication requires the customer to be present in person each and every time.

From September to December 2019 EAST ran a poll on this topic for which he results can be seen in the chart below. 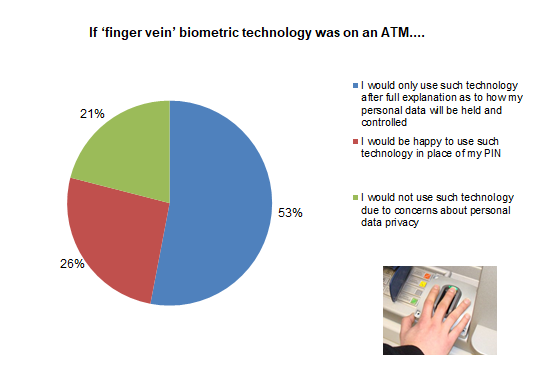