A joint action by Europol and 10 countries against the criminal misuse of VPN services, targeted the users and infrastructure of VPNLab.net.  This resulted in the take down of 15 servers.  The VPN service aimed to offer shielded communications and Internet access, and was being used in support of serious criminal acts such as ransomware deployment and other cybercrime activities. 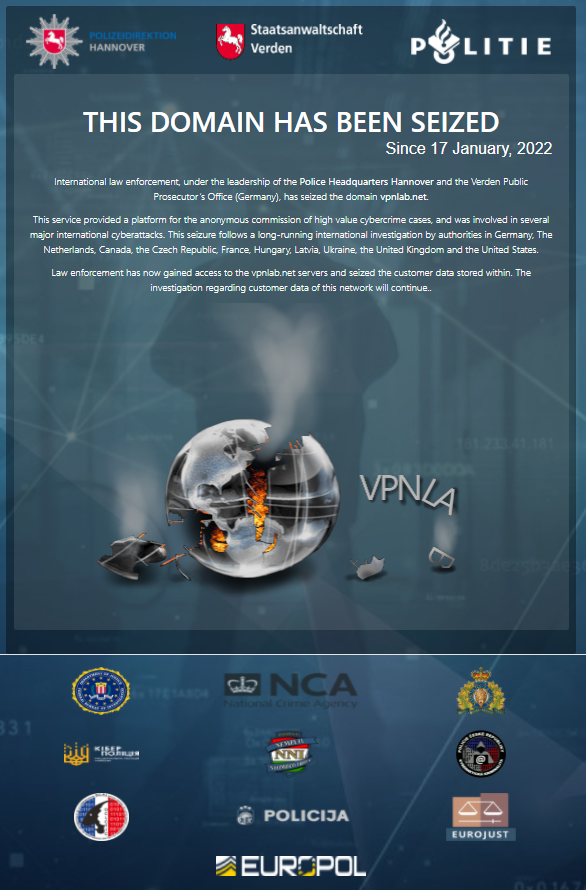 Coordinated disruptive actions took place on 17 January 2022 in Germany, the Netherlands, Canada, the Czech Republic, France, Hungary, Latvia, Ukraine, the United States and the United Kingdom.  Law enforcement authorities have now seized or disrupted the 15 servers that hosted VPNLab.net’s service, rendering it no longer available. Led by the Central Criminal Office of the Hannover Police Department in Germany, the action took place under the EMPACT security framework objective Cybercrime – Attacks Against Information Systems.

VPNLab.net was established in 2008, offering services based on OpenVPN technology and 2048-bit encryption to provide online anonymity for as little as USD 60 per year.  The service also provided double VPN, with servers located in many different countries. This made VPNLab.net a popular choice for cybercriminals, who could use its services to carry on committing their crimes without fear of detection by authorities.

Law enforcement took interest in the provider after multiple investigations uncovered criminals using the VPNLab.net service to facilitate illicit activities such as malware distribution.  Other cases showed the service’s use in the setting up of infrastructure and communications behind ransomware campaigns, as well as the actual deployment of ransomware.  At the same time, investigators found the service advertised its services on the dark web.

As a result of the investigation, over one hundred businesses have been identified as at risk of cyberattacks.  Law enforcement is working directly with these potential victims to mitigate their exposure.

provided support for the action day through its Analysis Project ‘CYBORG’, which organised more than 60 coordination meetings and 3 in-person workshops, as well as providing analytical and forensic support.

The following authorities took part in this operation: