Ten hackers who stole over $100 million in cryptocurrencies from celebrities and influencers in SIM swapping attacks have been apprehended in an international operation co-ordinated by Europol.

Eight criminals were arrested on 9 February as a result of an international investigation into the series of attacks targeting high-profile victims in the United States. These arrests followed earlier ones in Malta and Belgium of other members belonging to the same criminal network.

The attacks orchestrated by the gang targeted thousands of victims throughout 2020, including famous internet influencers, sport stars, musicians and their families.  The criminals are believed to have perpetrated the thefts after illegally gaining access to their phones.  The criminals worked together to access the victims’ phone numbers and take control of their apps or accounts by changing the passwords.  This enabled them to steal money, cryptocurrencies and personal information, including contacts synced with online accounts. They also hijacked social media accounts to post content and send messages masquerading as the victim.

SIM swapping fraud was identified as a rising trend in the latest Europol Internet Organised Crime Threat Assessment. Cybercriminals take over the use of a victim’s phone number by essentially deactivating their SIM and porting the allocated number over to a SIM belonging to a member of the criminal network.  This is typically achieved by the criminals exploiting phone service providers to do the swap on their behalf, either via a corrupt insider or using social engineering techniques. 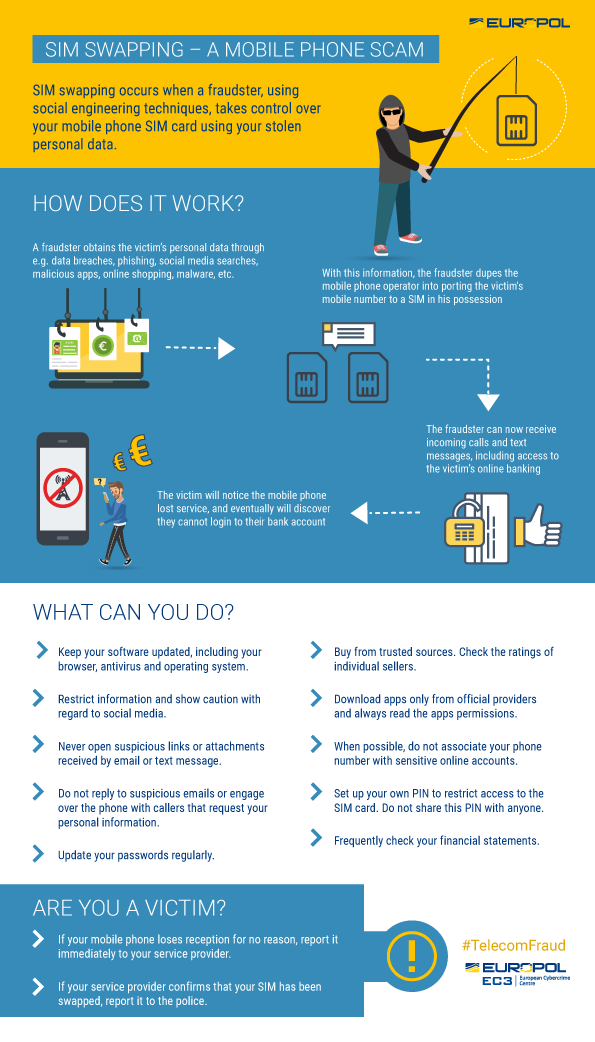 DON’T BE THE NEXT VICTIM

It’s not just celebrities who are under attack.  Anyone with a mobile phone can fall victim to SIM swapping. The above image gives some tips as to how to protect yourself against the threat, and information can also be found on Europol’s dedicated page.

For more advice on how to protect your financial information from such a scam, watch the clip below.

The EAST Payments Task Force (EPTF) focusses on the security of payments and transactions, and SIM swapping falls within its remit.