This event, which was organised by Europol’s European Cybercrime Centre (EC3) on 13-14 December 2016, provided the law enforcement community with a comprehensive overview of payment card issues such as compromising payment card data, skimming, ATM cashing out, e-commerce and airline frauds. The event, which was co-organised with ASEANAPOL and INTERPOL with the support of the Romanian National Police and the Royal Thai Police, was hosted by the ETDA (public organisation), and the Ministry of Digital Economy and Society.

EAST Executive Director Lachlan Gunn gave an overview of the European ATM Fraud situation and highlighted the issue of losses in the ASEAN region faced by European card issuers. 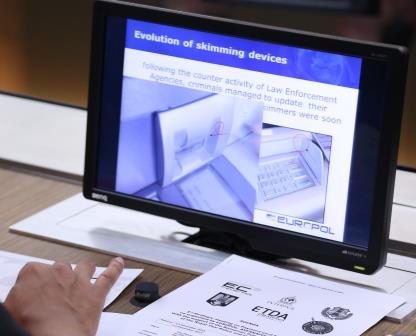 The aim of the event was to discuss operational achievements in the area of combating cyber fraud and to agree on the steps to follow with regard to security of non-cash means of payment. It focused on the exchange of expertise in the area of prevention and combating ATM/POS fraud, data compromising, ATM malware, and eCommerce fraud. A specific action plan concerning further cross-regional cooperation between European and Asian law enforcement was devised, following recent successful operations between the two parties.

As a result of discussions at the event, and to strengthen inter-regional industry communication to combat terminal and payment security, EAST is in follow up communication with the banking sectors in Indonesia and Thailand.

In March 2016 EAST supported the Second Strategic Meeting on Payment Card Fraud which was held at the Royal Malaysian Police College in Kuala Lumpur, Malaysia.  The meeting was hosted by Europol, INTERPOL and ASEANOPOL with the financial support of the Romanian authorities.

In November 2015 EAST supported the First Strategic Meeting on Payment Card Fraud which was held in the INTERPOL Global Complex for Innovation (IGCI) and was co-hosted by Europol and INTERPOL with the financial support of the Romanian authorities.

In October 2015 EAST participated in a two-day meeting in Bogota (Colombia) to discuss payment card fraud overseas and money withdrawals in Latin America.